Whitewater fun in the Georgian Caucasus

Above the Glacier d'Argentiere in the Mont Blanc area.

Bivy at 5200 m on the shoulder of Peak Dankova, Kyrgyzstan

When I was little I often saw cartoons on TV that showed people and animals that were going ‘on an adventure’. The smurfs, my little pony, David de Kabouter, etc. I then always wondered what it would be like to go ‘on an adventure’.  I think this wondering has never changed, and is probably one of the reasons I do adventure races.

And so we, team Vertical Dissidents, decided to go ‘on an adventure’ again. This time it would be the Harz in Germany. Bas moved to Norway and needs to focus on his life and work there, and so we were going to participate as a trio: Maarten-the-Machine, Arjan-the-Tarzan, and myself. We’re aiming for the Raid in France in September, and we saw the Harz as a good training weekend for this. We started the race knowing we would be unranked because we are ‘only’ a team of three, but that wasn’t really an issue – we just wanted to experience yet another adventure.

Racing on the continent is always a logistical challenge for Arjan and me. The problem is that bit of water that needs to be traversed. On Friday morning, Maarten picked us up from Eindhoven Airport. Unfortunately the traffic was really bad, and once we finally arrived we struggled to change the paddles of the bike I borrowed of Frederike (huuuge thanks!!). Thanks to some help and tools of other teams we managed, but it took a long time, and we finished packing just in time for the bike-drop off (read: 1 minute before closure). When the race briefing finished, we still had to eat. Luckily, Adventure Food meals come in handy sometimes J Because of our great preparations and an early start we didn’t get much sleep that night (1,5 hours). My body had decided to make it an even longer adventure race, because I had also barely slept on Thursday night because of work-related issues and the early flight. One thing was sure: this was going to be a perfect training for the Raid in France!

The race would start at 4am. Maybe this is where I made a mistake, who knows. I was cold and hadn’t put on an extra layer in the time we were waiting for the starting signal. I shivered, but was excited and longed for the adventure.

The long-awaited film about the Kokshaal Too Expedition in 2014 is here. Enjoy!

A random picture from our galery 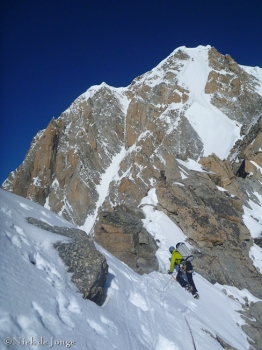